K&R Negotiations co-founder and CEO Mladen Kresic recently penned a guest column for the Hartford Business Journal’s Talking Points section. The guest post discusses Kresic’s recent encounter with Congressional Medal of Honor recipient Paul Bucha, who was a captain of the 101st Airborne Division during the Vietnam War and, later in life, a successful business leader and chief executive.

While accompanying his son’s Cub Scout troop to hear a talk given by Bucha, Kresic was struck by how the principles of leadership described by the speaker were indispensable qualities for a good negotiator. END_OF_DOCUMENT_TOKEN_TO_BE_REPLACED

After weeks of suspense and considerable acrimony, the U.S. debt ceiling negotiations were resolved (for now, at least) in the 11th hour on August 2. From the perspective of someone who makes a living showing private and public sector organizations how to negotiate to create win/win situations, I followed the proceedings with interest. And there is no doubt in my mind the players could have benefited from following a few of our basic negotiating principles.

Fortunately, most business negotiations are not exposed to the glaring spotlight of the press, nor do typical negotiating parties believe there is anything to gain by demonizing their opponents. We teach our clients that “winning together” is almost always better than creating a win/lose scenario that prevents better long-term outcomes for both parties.

One of the critical questions in this negotiation was: What did the time factor mean when both sides apparently had as much to lose by the failure to come to an agreement? That’s why we developed a way to help organizations forensically analyze the factors that drive the probability and timing of a deal closing, including the essential factors of business/economic needs and timing. Unless everyone agrees on the needs and deadline(s), a timely outcome to the negotiation is in jeopardy. And when it came to the possible default of U.S. financial obligations, the parties didn’t have the luxury of “agreeing to disagree” and walking away from the table. The irony here is that a looming deadline was very predictable a long time ago. The escalating deficit is not a secret. If this were a business with this kind of deadline, the right approach would have been to manage the timeline by examining each budgetary line item early in the process beginning a year ago.

As mentioned earlier, the fact that the negotiations were played out in public did not help the process. This is a dynamic unique to the political negotiation process, for nowhere else is the game of leverage played as much outside of the negotiating room as in it. To avoid this type of conflict, and help move the negotiation towards resolution earlier in the cycle, we formulated a tool called the MID Chart of Goals™. The MID helps dealmakers prioritize the issues and identify the true ends of a negotiating process, thereby reducing disagreement over the means.

MID stands for Mandatory, Important, and Desirable. Applying the MID analysis to the debt negotiation would have helped the democrats and republicans identify and compromise on conflicting outcomes that are not mandatory but which may be important or desirable to a particular constituency, thereby allowing everyone to focus on issues that are mandatory, such as overall deficit reduction.

These are just a couple of examples of how practices followed by many successful companies in the private sector could have been applied to this critical negotiation scenario. Hopefully, the parties involved learned some lessons that will make the process work more smoothly in the future, as the detailed negotiations will continue to tackle the deficit problem.

Through all the twists, turns and spin from both Republicans and Democrats, we have been musing on how the high-stakes budget negotiation game in Washington reflected some of the lessons of good negotiation strategy. We weren’t the only ones thinking about the business implications of the debt deal: The Stamford Advocate’s Richard Lee wrote a story about the negotiations’ potential impact on businesses, and included our perspective.

“With some foresight and a realization that the issue would be volatile, Congress should have started the review more than a year ago, with a line-by-line examination of spending and income to determine areas of agreement,” said Mladen Kresic of K&R Negotiation Associates in Ridgefield.
“There is a noble goal. The short-term perception of a political win will come at the expense of a long-term win,” he said, not surprised that the issue was not addressed sooner. “People don’t act until the pressure is on. It’s going to continue to be a political football.”

Thanks to Mr. Lee for letting us contribute. Here’s the full story; Debt limit crisis leaves corporations looking for answers.

In this short video, learn why negotiation is really the art of finding agreement. 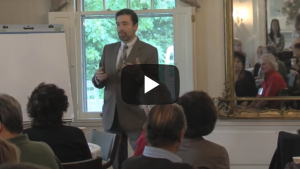 Mladen Kresic introduces the concept of value-based negotiations leverage and why it is a powerful tool for moving conversations to an agreement.